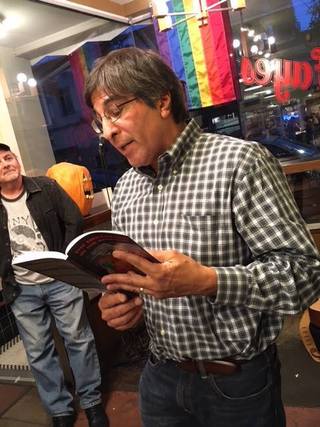 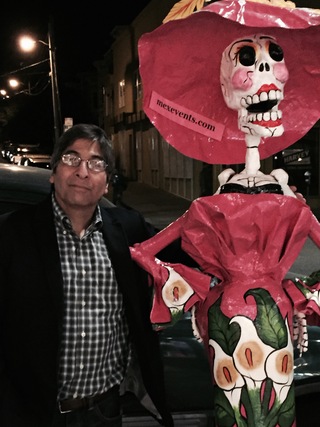 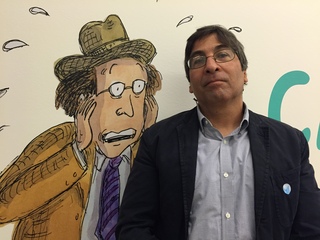 I did the Lit Crawl thing last night and had fun. I read at a cool place called Faye's Video & Expresso Bar with four fantastic writers and one great musician in the Mission. The crowd was enthusiastic. I had a treat when a friend showed up unexpectedly, Rob Davidson, a fine writer who teaches at Chico State and has a new, excellent book of flash fiction out, Spectators, Five Oaks Press. He and a few students who came by cheered me up. I had been down with the usual turmoil in the world getting to me, when I had been successfully distancing myself from it. I no longer take it for granted that Trump will be removed from office before his first term is up. I just hope he doesn't get us all blown up in the interim. He is crazy enough to let the big ones fly on any flimsy pretext. Of course, keen people the nation over knew this going into the ballot booth in November and the day after when he had won. Hence, the extreme dejection that followed his election. Nothing, absolutely nothing about Trump is surprising. He is an incompetent, thin-skinned narcissist who we have handed the power to destroy the world. He has it, it's his. Who's going to stop him? I encourage people to offer constant, private prayers for world peace and nuclear sanity. Mine is simple: "Peace in the world, peace in the world, peace in the world." I haven't been saying it enough lately. I've been slipping as I've failed to keep up with the latest madness out of the White House, whatever it is. But I think it is important. I think our survival depends on it, turning our thoughts to our continual existence.

The Mission is hell. I don't pretend to like it. If by chance you're not familiar with the region I speak of, I live in the San Francisco Bay Area. The Mission is the formerly majority Latino, now more diverse, gentrifying neighborhood that is beyond gritty. The poverty is staggering. The homeless on Mission Boulevard itself and the surrounding streets are pitifully uncared for. We live in the third world. We should just start admitting it. The United States of America is a third world country in many respects. Our major cities are cesspools of human misery. First world conditions also prevail, of course, which makes us one of those wealthy third world countries, where the gap is wide between the rich and the super poor. I heard no mention of the poor during the last election, just assurances that the middle class would be taken care of. Right on! That is necessary. But the poor, man, the poor. Who's watching out for them? It's getting to be damn depressing going into San Francisco for this reason. Any part of it, even glorious downtown, is filled with destitute beggars. The pleasures of the city are gone. I can't pretend they're not there. Portland gave me the same impression when I visited a few months ago. It had gotten much poorer, much more down and out since my last visit years ago.

My reading went okay, I think. A few people told me they enjoyed it and seemed sincere. I thank them sincerely for their kindness. The other writers, as I said, were awesome. L.J. Moore-McClelland. Genanne Walsh. Jon Sindell. Peter Bullen. That's them. And there was the extraordinary singer-songwriter Michael Crabtree. We all went at it. Gave it our best without ego involved, I could hear it. It was swell. It was a good scene in that cool Video & Expresso Bar. Nobody was boring. Afterwards, Jackie and I heard some Latino poets read good work at another venue close by. I had my picture taken with my old friend Katrina out front. She whispered that I still had a few good years left. I hope the same can be said for all of us, truly, and that more can be said for our common home: that this watery ball of misery and occasional happiness can keep spinning for another millennia or so, while we figure out how to get along and not blow ourselves up. We need to keep praying.